The Top Playing Field is a recreational area that is open to the public and has children’s play equipment.

The land was  donated by Mr Wootton Isaacson in 1928 for the benefit of the children of Slindon together with a small endowment  to cover the cost of its upkeep. The conveyance appointed the Churchwardens of St Mary’s Church  as its Trustees and made the Rector and Primary School Managers responsible for its management.

Dogs are allowed but, in accordance with the Byelaw 3 made under sections 12 and 15 of the Open Spaces Act 1906 and section 164 of the  Public Health Act 1895, they must be kept on a lead at all times.

A full copy of the byelaws are attached, although the PDF format may not be accessible so please contact the Clerk for a copy.

The Parish Council has always taken responsibility for the recreation ground which it inherited from the Churchwardens and Overseers of the Poor, received as their share of the  Slindon Enclosure Award in 1870/71 under which large areas of common land were enclosed and divided between existing  owners in proportion to their existing holdings.

The recreation ground was registered as a public green in 1969 and later, in 1980, the then clerk Bernard Keeling appeared before the Commons Commissioner to successfully arrange for the council to be registered as its owner.

The Parish Council is Trustee of the Recreation Ground Charity.

Use of the grounds is governed by byelaws made under section 8 (1) (d) of the Local Government Act 1894.

A full copy of the byelaws are attached, although the PDF format may not be accessible so please contact the Clerk for a copy.

Believed to be as old as the village itself, over the years the Parish Council has taken responsibility for the pond’s upkeep which has always proved to be a costly affair! 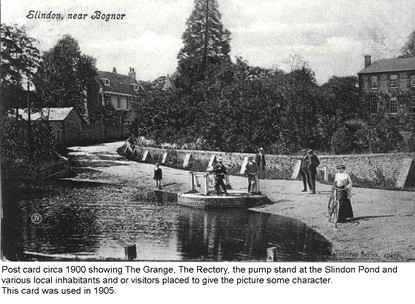 The pond was first registered as a town or village green on 17 May 1967 although in February 1971 an objection was made by William Charles Stuart Harrison, County Surveyor, on the grounds that part of the area was highway not village green at the date of registration and therefore owned by West Sussex County Council. As a result, the register entry was amended in December 1971 to exclude a width of highway verge on the west side of the carriageway leading from St Mary’s Church, Slindon to Elm Cottage, Slindon but the rest of the pond and surround was still registered as a town or village green. At this time the land was thought to be waste of the Manor of Slindon which at that point was owned by the National Trust although recent enquiries confirm they do not own it.

As early as 1897 a special Parish Council meeting approved an extra 3d rate to clean out and strengthen the pond at a cost of £4.10.0 and in 1905 the Rural District Council advised that a noxious smell could only be eliminated through cleaning at a cost of £16. Then at a special parish meeting  in 1927 there were two votes in favour of doing away with the pond, with 18 in favour of cleaning which was then funded by public subscription rather than rates. Between 1948 and 1950 the County Council stepped in to clean the pond as it was identified as a useful purpose in drawing storm water off the roads. In 1980 the parish council benefited from Arun District Council’s Lotteries which was used to strengthen the banks and again in 2000 a local volunteer group secured funding as part of a millennium project.

The Parish Council is currently exploring an application under ‘Operation Watershed’.

The War Memorial was designed by Mr A Booker and it commemorates 14 fallen local men. It was dedicated on 5 March 1921 and following the Second World War, a dedication was added to commemorate the three fallen of that conflict.

The first mention of the War Memorial is in the minutes from 1951, when it was found that the Parish Council was legally entitled to maintain the Memorial Site, even though it was not owned by the council, so long as the annual expenditure did not exceed 1d in the £ and the County Council approved. It had hitherto been maintained by Mr Wootton Isaacson and his sister Lady Beaumont.

The Slindon branch of the British Legion maintained the Memorial until the branch closed down in 1960, when it donated the balance of its funds amounting to £10 towards its future maintenance and the Council assumed full responsibility.

Under the War Memorials (Local Authorities’ Powers) Act 1923, s.1 the Council has the power to maintain, prepare and protect war memorials in the council’s area.

The War Memorial was listed on 20 July 2016, included in a list of buildings of special architectural or historic interest approved by the Secretary of State for Culture, Media and Sport under Section 1 of the Planning (listed Buildings and Conservation Areas) Act 1990.

The Parish Council has always been responsible for a three-acre allotment field which it inherited (along with the four-acre recreation ground) from the Churchwardens and Overseers of the Poor, received as their share of the  Slindon Enclosure Award in 1870/71 under which large areas of common land were enclosed and divided between existing  owners in proportion to their existing holdings.

For a long time much of the land was let to farmers or smallholders although, following a suggestion that the land should be sold for development to raise funds for a new pavilion, in July 1962 the Parish Council was persuaded that it would be better used as a football pitch. In 1963 The Ministries of Agriculture and of Local Government agreed to a change of use, conditional on the Parish Council providing a suitable alternative as it was given to the Council’s predecessors to provide “allotments for the deserving poor”. However, as the sole allotment holder had died several years before the Parish Council considered this was not a problem and ceased to offer this facility.

Parish councils have the ‘power’ to provide allotments which means that they can do so. They may also have a ‘duty’ to do so if there is sufficient demand, which means they must provide them under section 23(2)of the Allotments Act 1908. This procedure is however rarely, if ever, used.